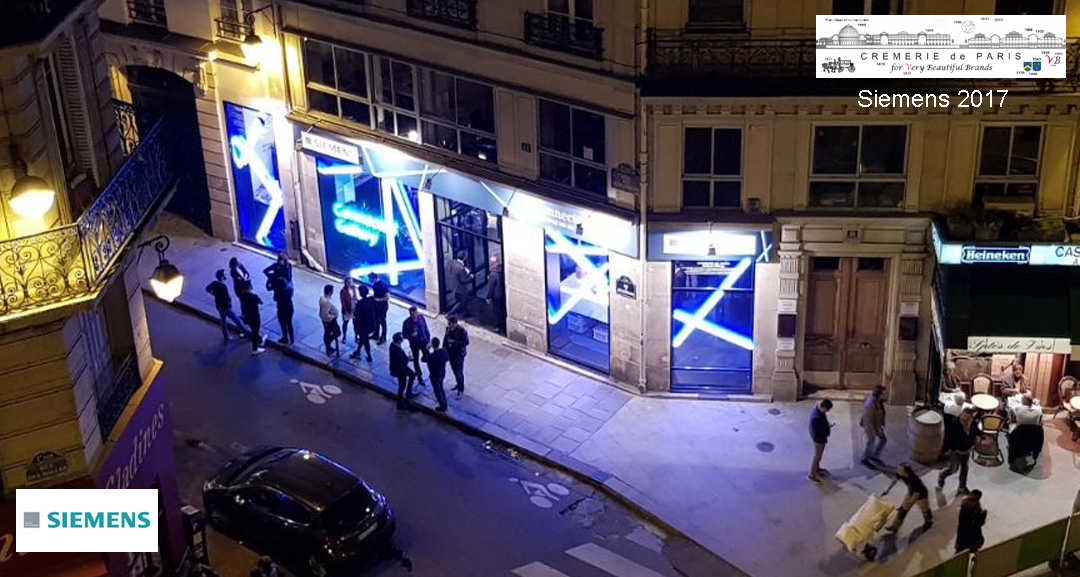 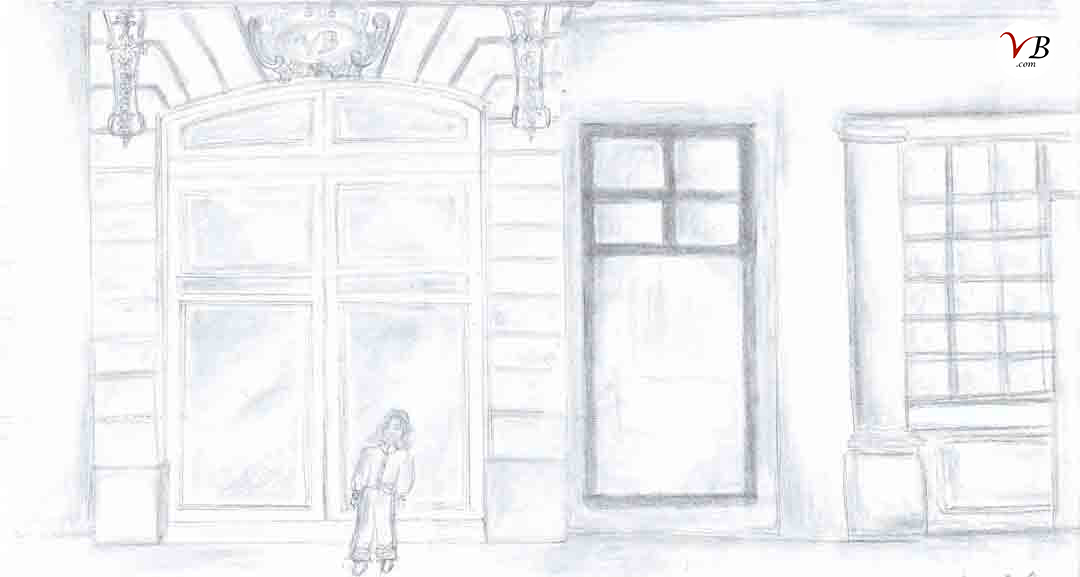 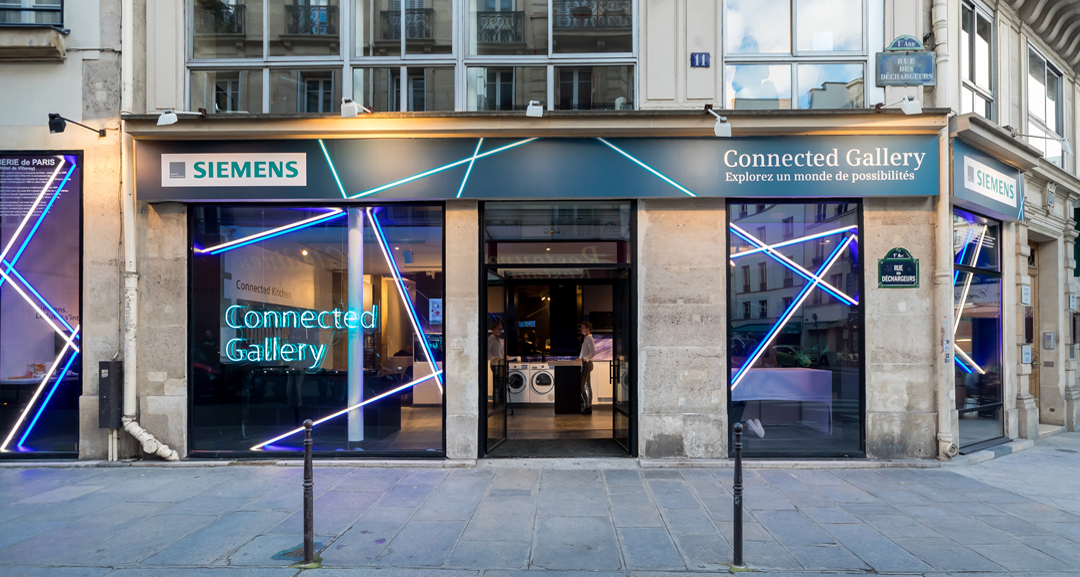 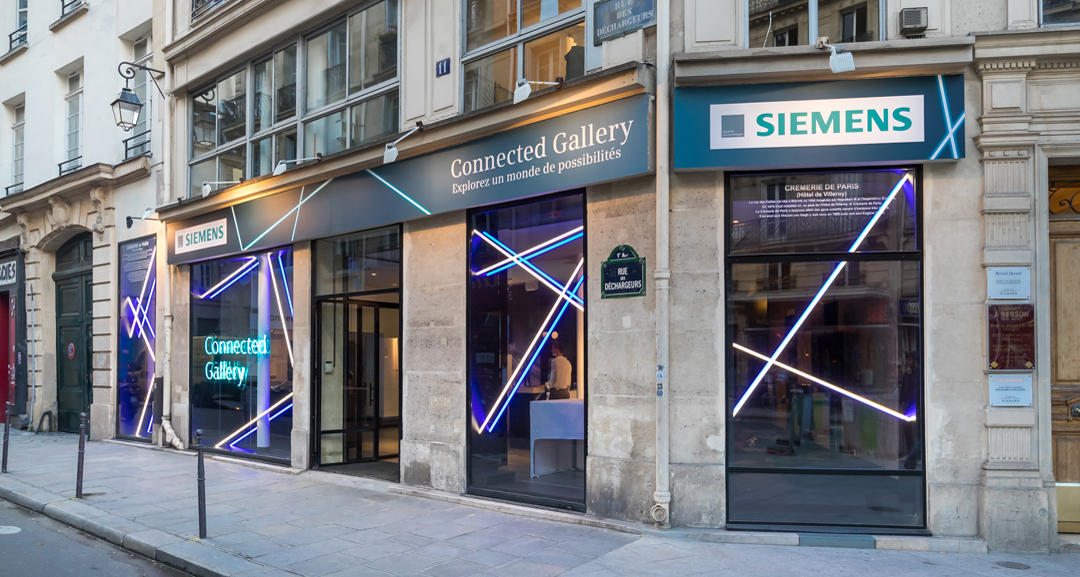 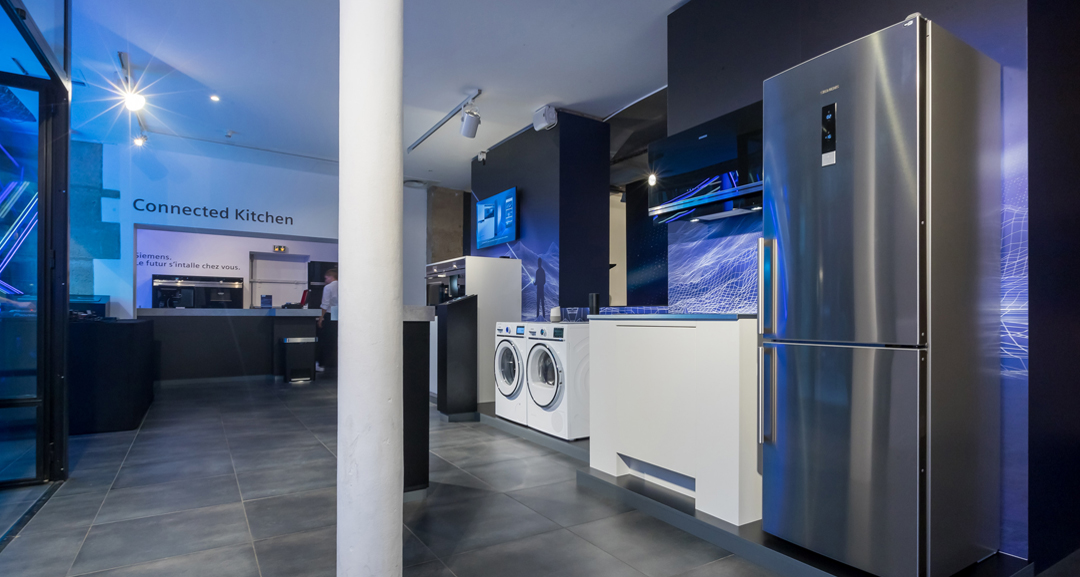 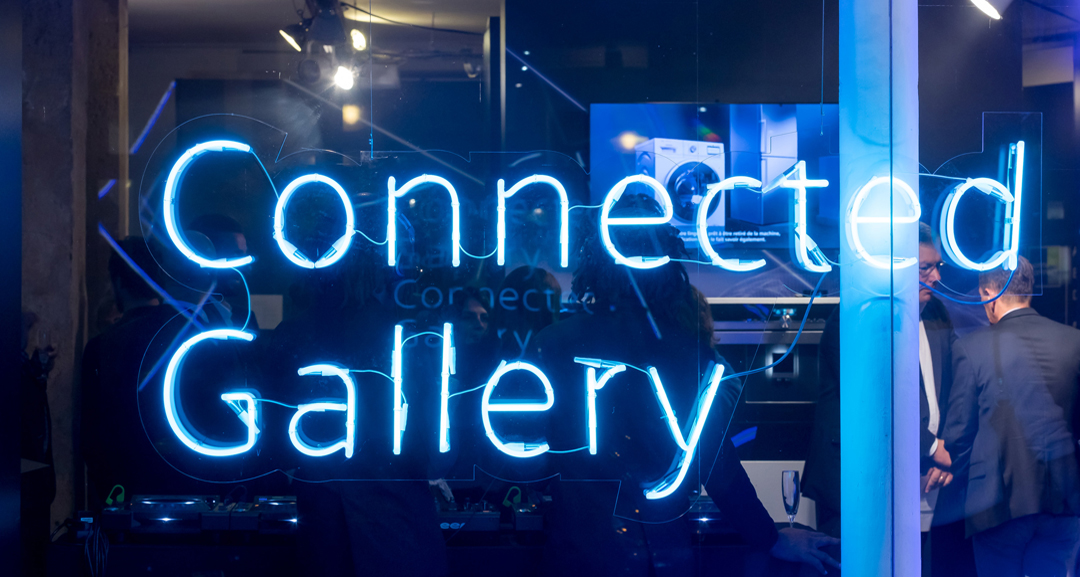 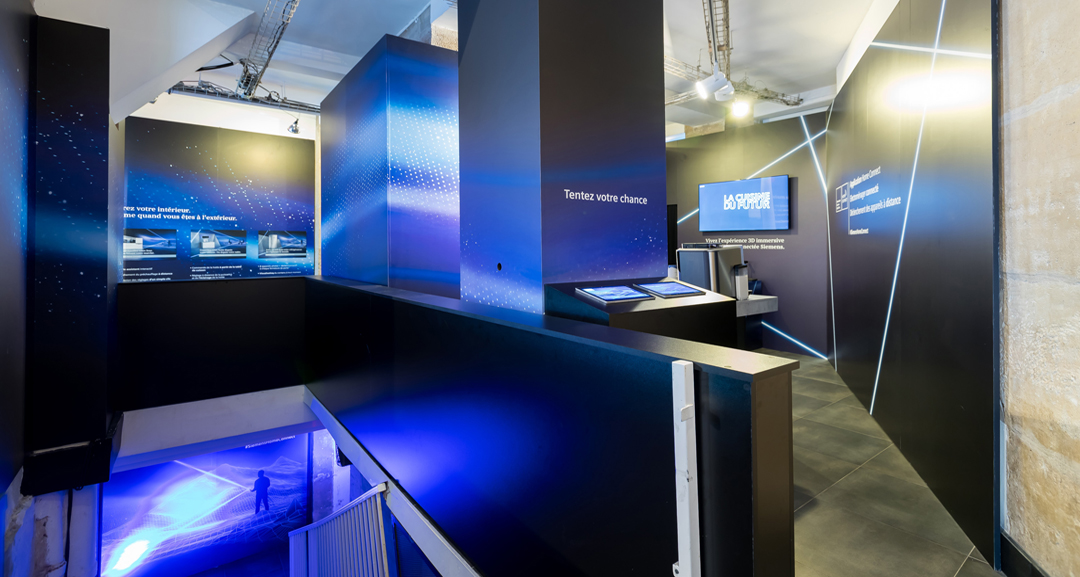 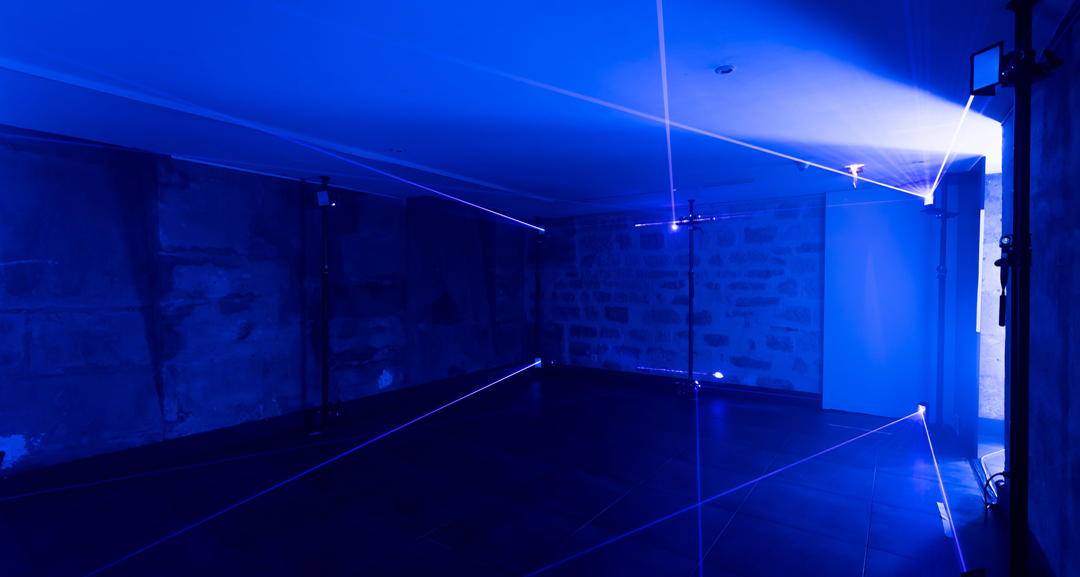 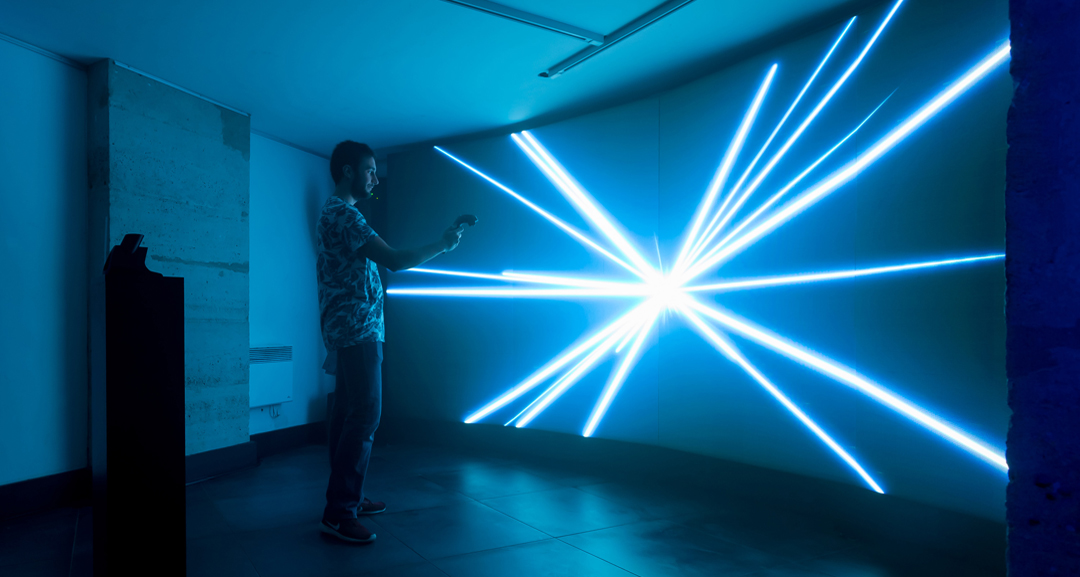 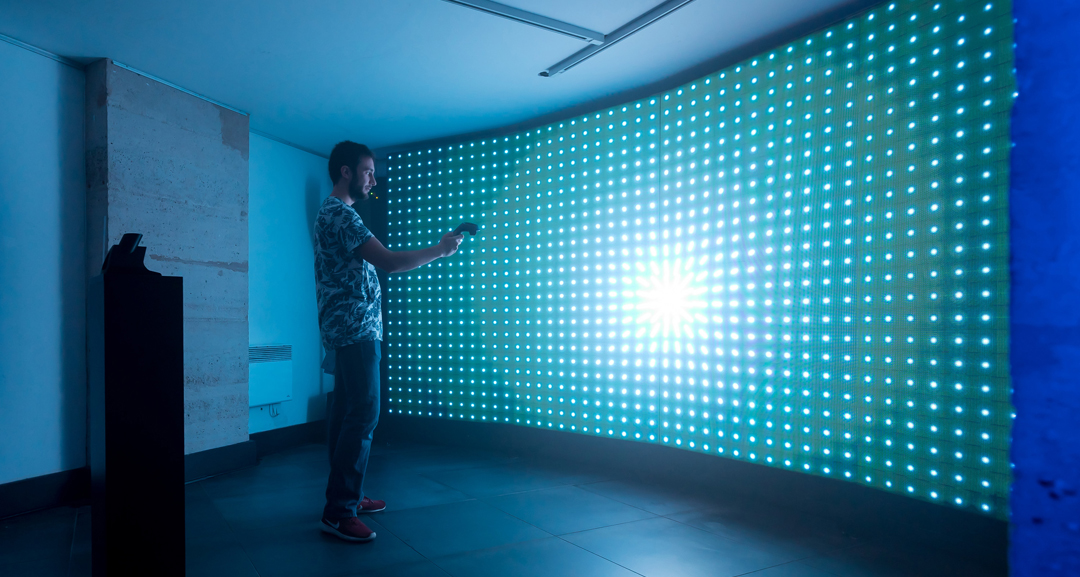 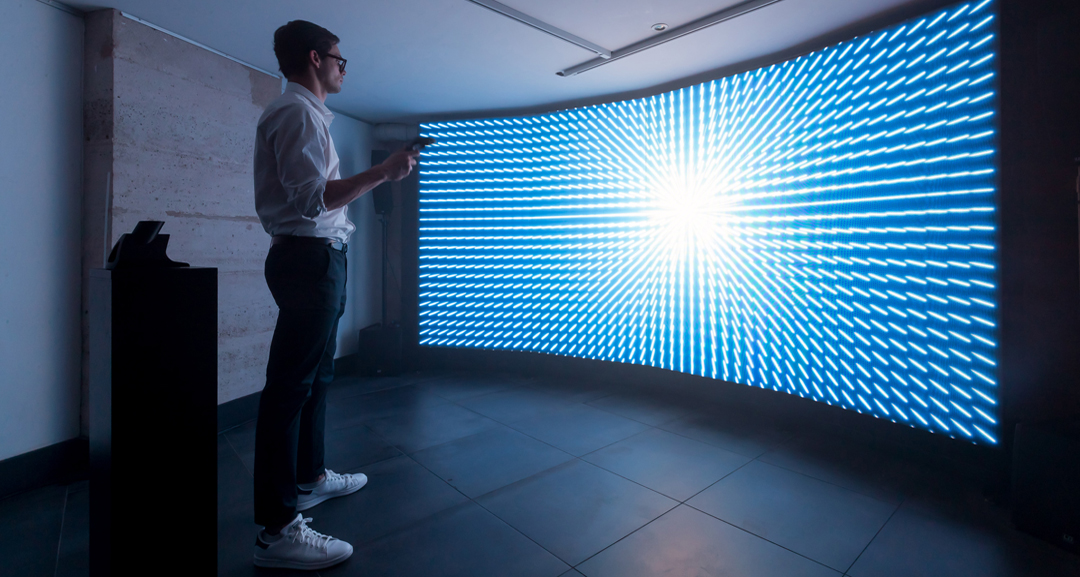 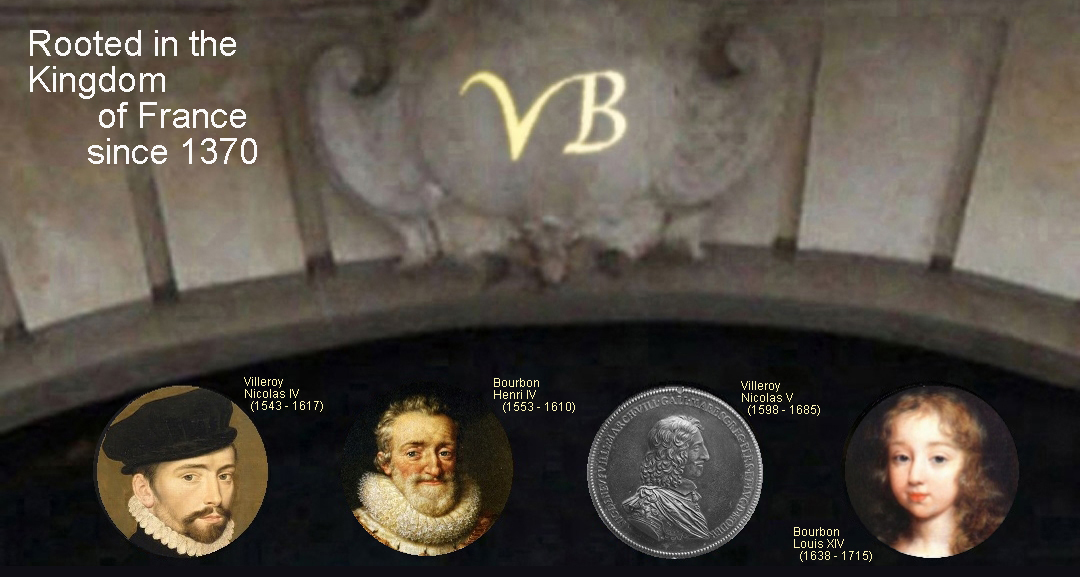 Siemens came from Munich to Cremerie de Paris
to present their latest kitchen equipment
through a Connected Gallery
only open for three days.
With it's latest technologies Siemens
makes it possible to control most of your kitchen through a smartphone.


Cremerie de Paris is a historic Telecom Location
from where are edited the Whitepages of several countries including Germany.
But our Telecom activities started long before
the 1990 arrival of the Internet, the 1881 invention of Electric trains by Werner von Siemens
and the 1870 invention of the Phone / Phone Books by Alexander Graham Bell.

When a message was really important
Louis XIV liked to come in person
so he could be sure nobody of his entourage
would intercept his letter. 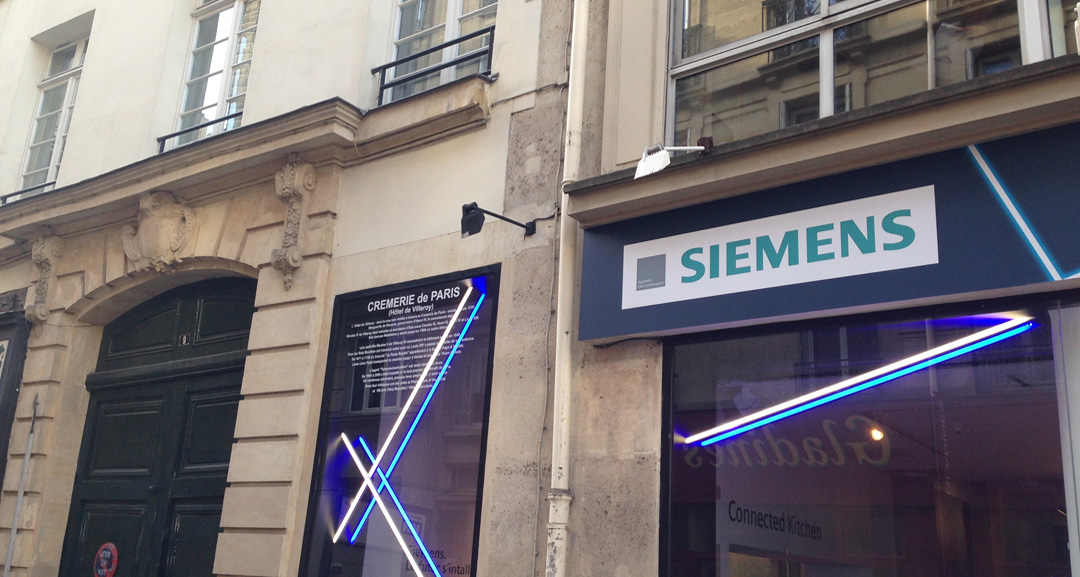 The Sunking who lived in the Castle of Versailles
loved Cremerie de Paris he had already know 1646 as a child.

At the time the future home of Whitepages.de
and of the Siemens Connected Gallery
was owned by his teacher Nicolas V de Villeroy.
During his lifetime Louis XIV only knew about electricity watching a thunderstorm.
The use of electricity was only invented two hundred years later.

Can you imagine how much the young Bourbon King
would have been fascinated to see the Siemens Connected Gallery.
A remote control enabled visitors to generate all kinds of artistic effects
on screens placed in the lower part of the Cremerie.
With electricity it would have been so much easier for Louis XIV
to build his future home, the Palace of Versailles.


Cremerie de Paris has seen many many inventions.
Becoming one of the first Internet Cafes it lived through the arrival of the web.
At the time American tech pioneers travelling through Paris had a hard time
to find an Internet connection still unknow at Hotels.
They somehow arrived at our Cremerie de Paris.

At the cafe the internet domain "White Pages" was registered for many countries.
Another invention was the Phone Book of the World.com
and the Brand Portal VB.com.

VB.com first registered in 1991 is one of the 676 Two Letter Domains.
Of course Siemens and it's fascinating history is one of the iconic brands
listed on VB.com (Very Beautiful)

By the way the Siemens.com domain is even older
going back to 1986 making Siemens.com the 28th oldest webdomain
and propable the first .com registered by a company outside the United States.

The White Pages project was helped by Aimee de Heeren,
an woman that had been part of a fascinating Telecom history.
When 18 years old she had met the inventor of the phone Professor Bell.
He had told her about the beauty of Paris les Halles, at the time the world's most famous food market.
Alexander Graham Bell loved to push young people
he gave her an advice
"To stay young you need to have young friends"
This might have contributed, 80 years later,
she pushed our Whitepages project.


Working as a secret sevice agent in WW2,
Aimée had run into a mutitude of inventors through the entire 20th century.
Buzz Aldrin who was on the Apollo 11 flight to the Moon with Neil Armstrong
came to see her every time he was in Paris.

2011 Cremerie de Paris was converted into a Pop Up Store location.
Now becoming a place where new inventions or products
are introduced to the press
and to the fan cummunity of the respective brands.

Siemens is one of the many famous brands
to have set up an expo. Some expos are so original
they enter the centuries old history of the Cremerie.
The expos have a global audiance
continuing on our various national Whitepages. 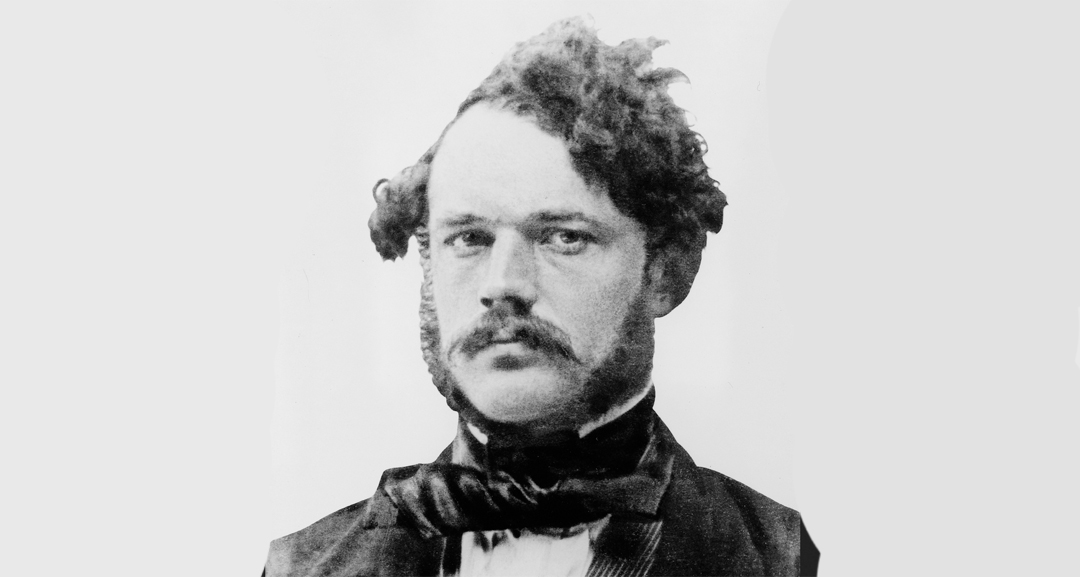 Siemens was founded in 1847 by Werner von Siemens
and Johann Georg Halske in Berlin. 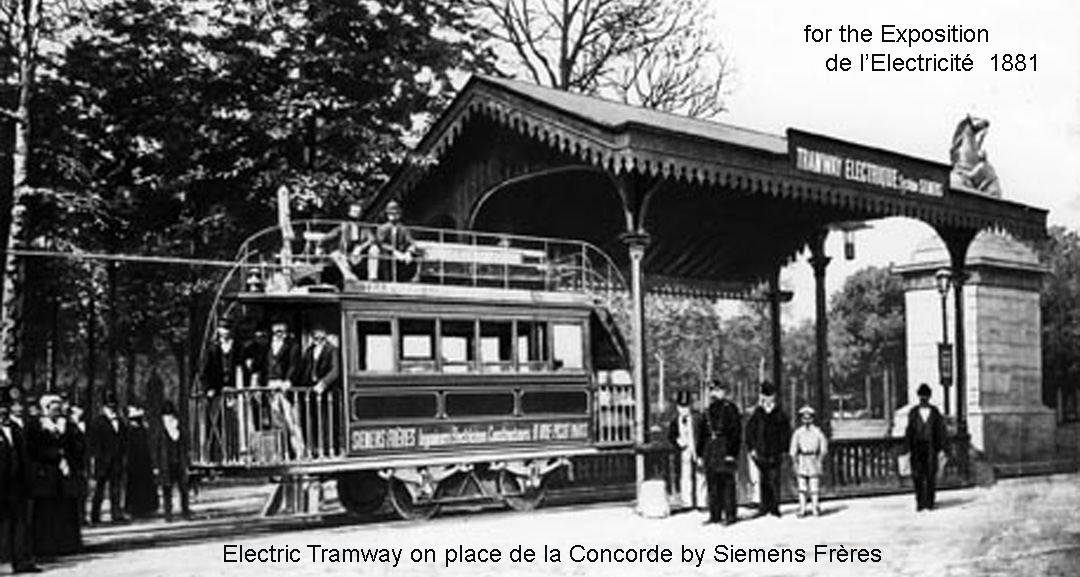 1881 Werner von Siemens came to Paris
to show the first electric tram
which was going from the place de la Concorde
a long the garden part of the Champs Elysees
to the Palais de l'Industry.
The tram was shown during the International Exposition of Electricity.
At the expo you could also meet Alexander Gram Bell, the inventor of the phone.

There is a possibility that Siemens had come to the Cremerie de Paris
facing the stunning Pavillons Baltard
constructed a few year earlier by Victor Baltard
under the eys of Empress Eugenie.


1900 Opend the Paris Metro network.
The first line was N°1 connecting the east to the west of the city.

From Place de la Concorde
to Chatelet les Halles it's only a few subway stops.
If you have some time
it's also a beautiful walk through the Tuileries gardens
through the Louvre along the Pyramide
passing by the renborn Luxury Department Store Samaritaine
located 200 m from the Cremerie de Paris.


Paris Metro Line 1 has been modernised by Siemens
becoming much mlore secure and efficient.

A little anecdote of the Siemens expo in relation to the Paris subway is
that some Ladies planning to organise the event
came to visit Cremerie de Paris May 5 2016.
They were accompanied by Fanny Rossi.

On that exact same day had just opened the new subway exit Marguerite de Navarre
facing all our Cremeries de Paris. The editor of this article was still a little sleepy
as he had watched the long attended
opening of the Metro exit at 5 am in the morning.

The construction had taken "forever",
in case you are interested a little photo reportage on VB.com
covering the construcion
which of course includes the magnificient Siemens event.


Unfortunately no Video was made showing the walk from
the subway station to the Siemens expo via new giant escalators,
from the salle d'échange du pôle Chatelet les Halles,
Europe's largest subway exchange.
The construction was not finished.
You can see the "walk" in above Video made a year later for Amazon.

2017 oct 13 - oct 15 opened,
for three days, the Siemens Connected Gallery.
It is still considered to be one of the most beautiful and tech saavy
Cremerie de Paris expo. 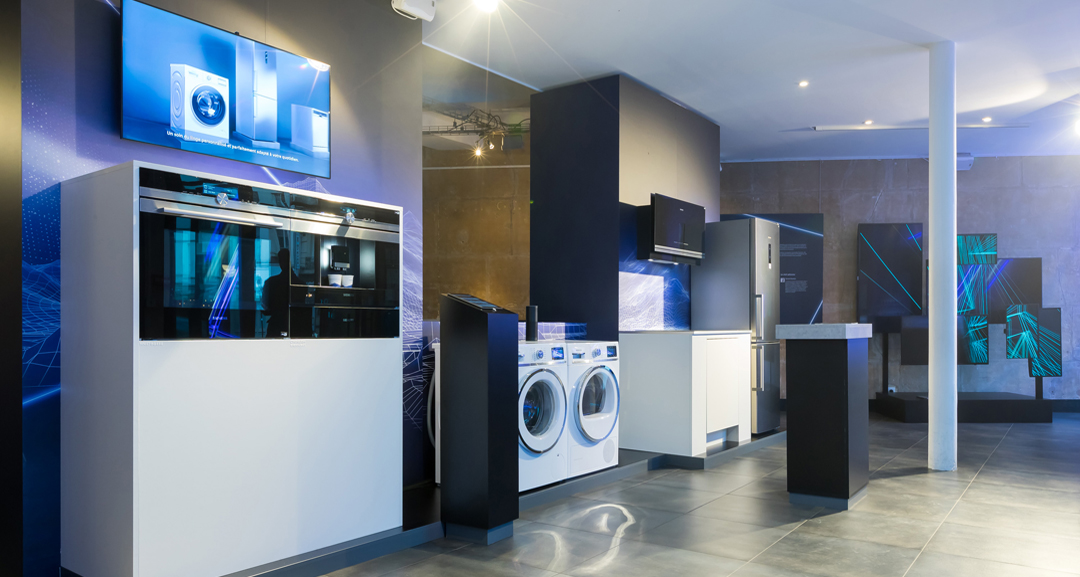 
They were invited to walk around the expo
taste a coffe from the Siemens Barista Coffee machine. 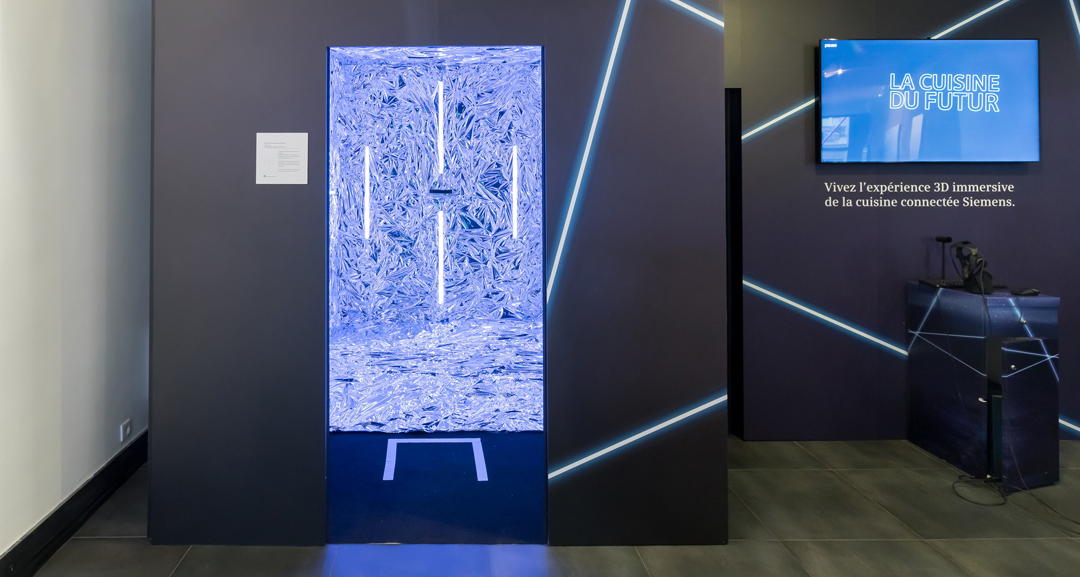 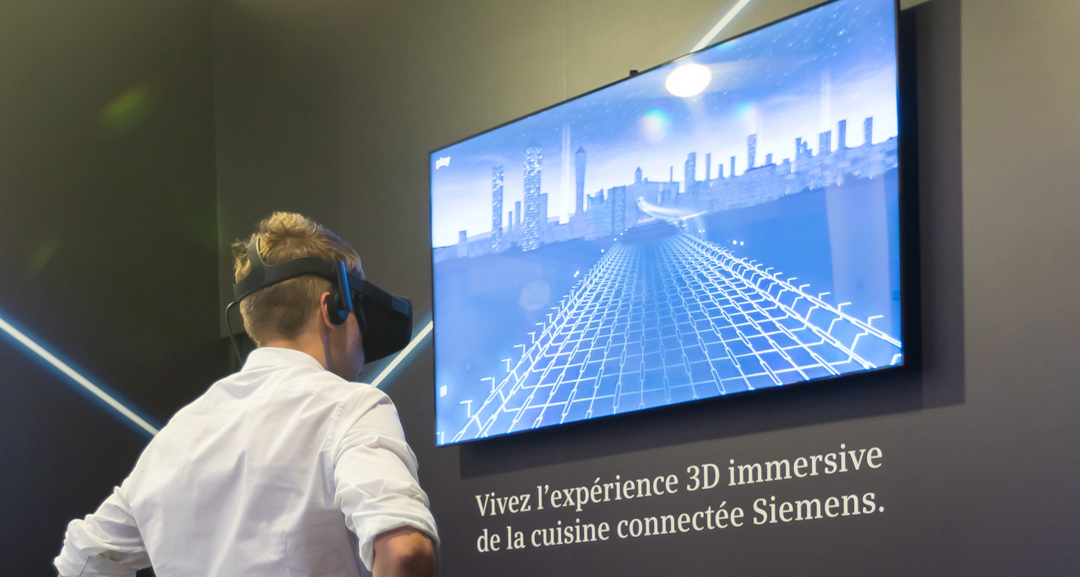 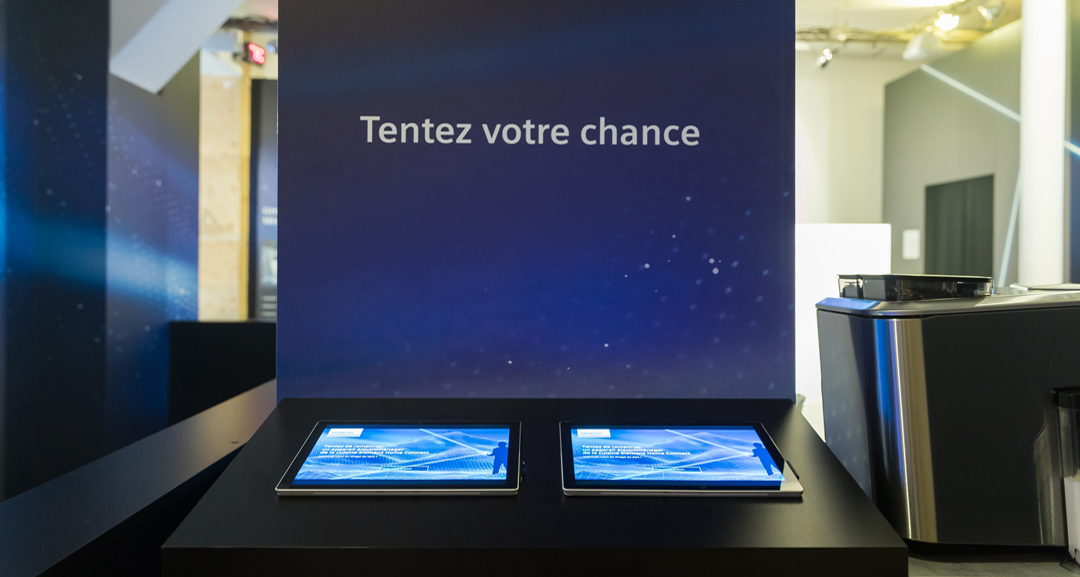 Some visitors had the chance to win
some Siemens Home connect equipment. 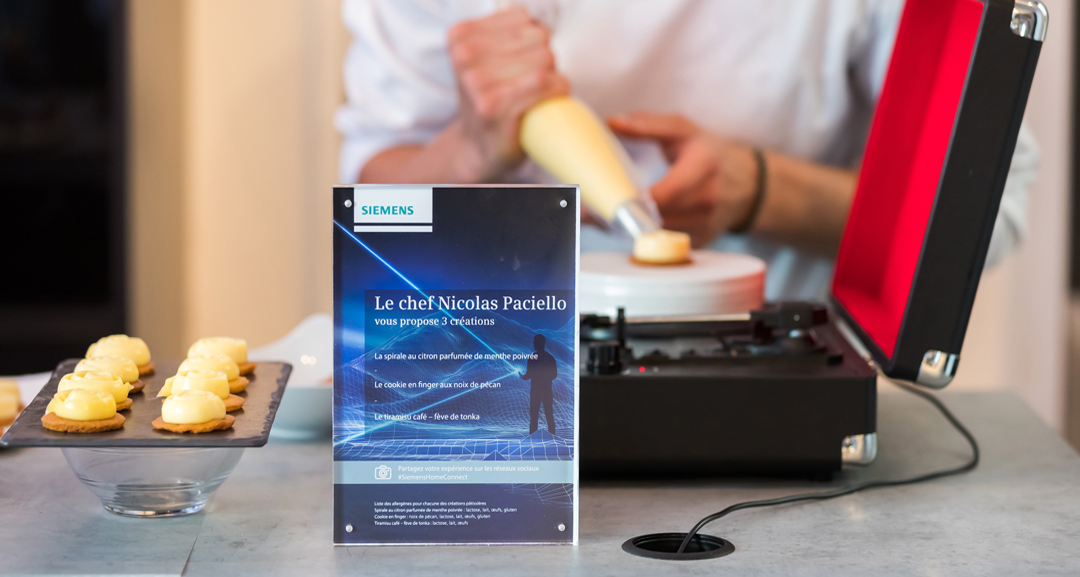 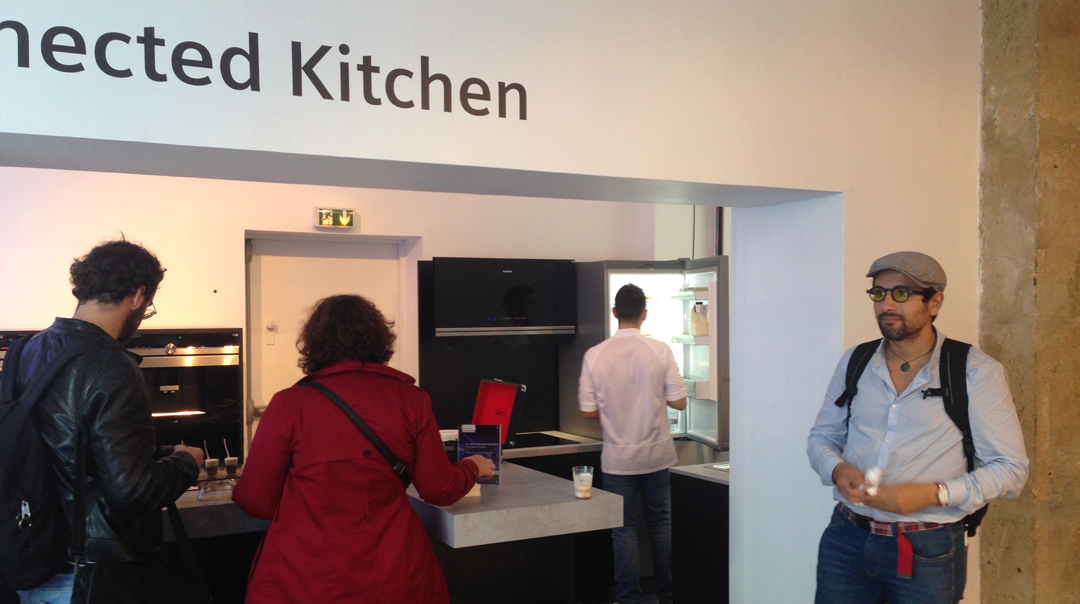 At the Siemens Connected Kitchen
the chef Nicolas Paciello prepared bakeries.
David Aaron Benali that made the Siemens video is waiting to get a cake.

Visitor could then walk down to see the Electric Gallery.

The expo was designed by Extreme Events,
a company that loves to add technology to events
and that has also desiged a Starbucks Pop Up Store
at Cremerie de Paris.
MD, Carla de Barros and Laetitita Crampe were in charge of the expo. 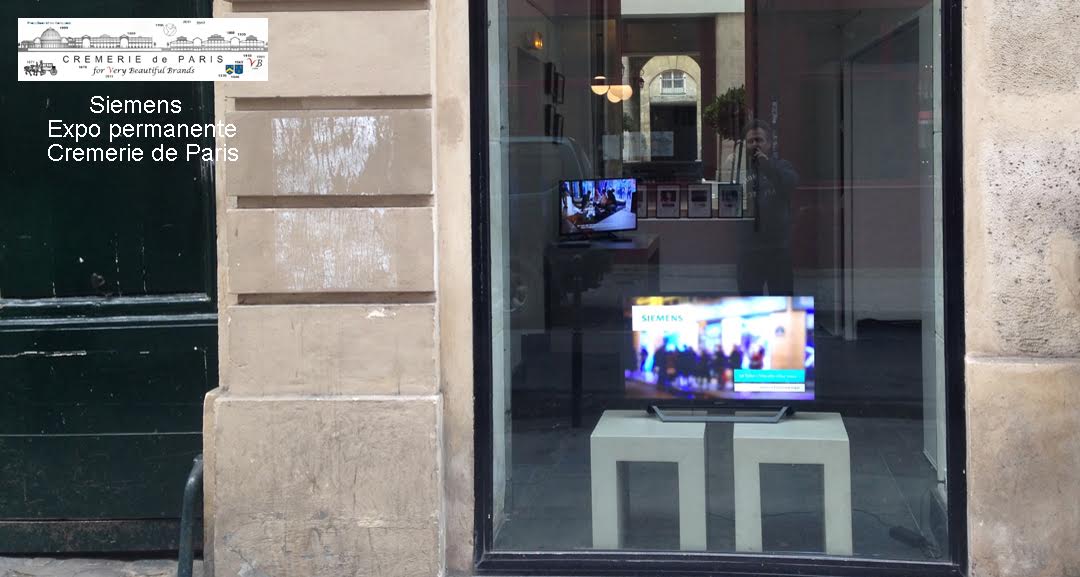 From time to time you can see a little flashback of the expo
walking by Cremerie de Paris N°1.
In between different Pop Up Stores
Cremerie de Paris shows videos of the most spectacular Brand Expos of the past.

The view into our courtyard has someting magical ...
Nothing has changed since the times
the horses of Louis Leon Pajot and Anselm Franz von Thurn & Taxis
were carrying mail to our Cremerie de Paris
and King Louis XIV came by to bring an important letter ...

and long long before we operated our avant-garde Internet cafe
where the Whitepages of many countries came alive ....

Even the water fountain for the horses is still in place ...